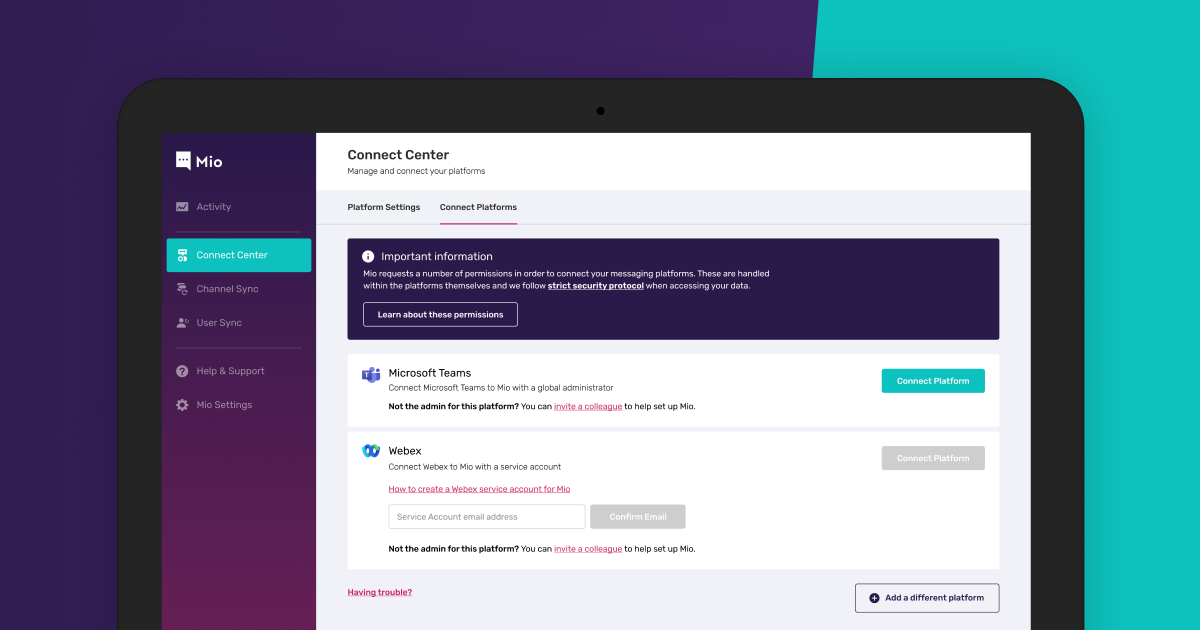 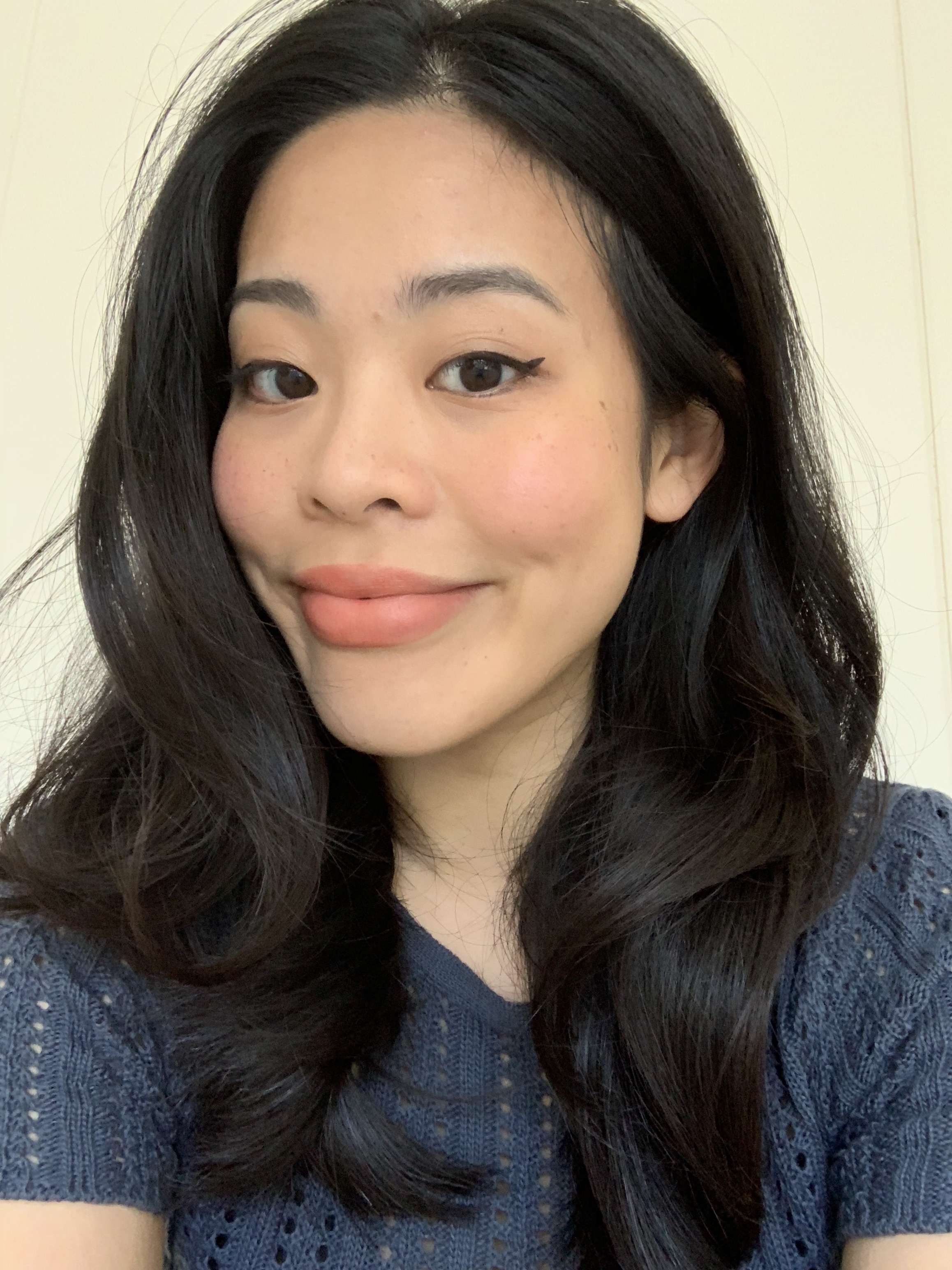 Save time and maximize productivity with the new Mio Hub

We’re excited to introduce a reimagined connection hub, making Mio an even more powerful tool for admins to sync their organizations.

With the new Mio Hub, it’s easier than ever to enable cross-platform chat. Designed with admin needs in mind, we’ve simplified the process of getting users and platforms imported and ready to communicate.

Discover all of our new features below and see the Mio Hub in action:

We’ve centralized the platform importation process into one easy-to-find dashboard.

Rather than having to click back and forth to configure settings and import platforms, the Connect Center now combines Platform Settings and Connect Platforms on one page.

Platform Settings walks you through a simplified authorization process and takes the guesswork out of necessary scopes and permissions. After ensuring that settings have been configured correctly, move on to our boosted version of Connect Platforms.

Our reason for this update is twofold:

Need a question answered? Don't hunt down guides and docs. Select Having trouble? in the lower right-hand corner to access a resource library of configuration instructions. 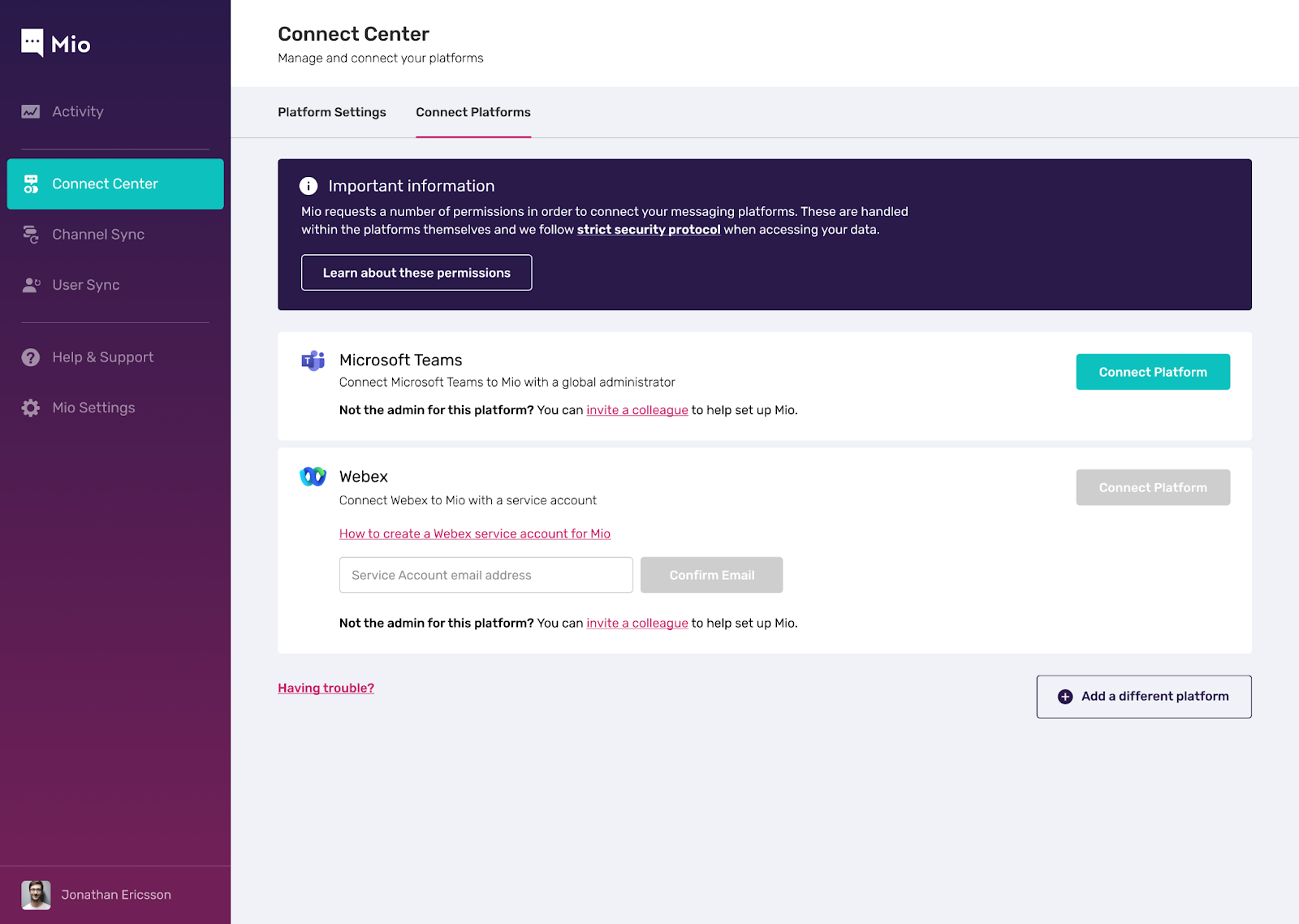 Channel Sync has been redesigned with a more intuitive interface.

Select and import your desired channels for cross-platform chat. This is done in the Import teams and channels tab and allows for additional workspace personalization.

Remove and re-import channels with ease, and easily filter by status to see which channels are imported. 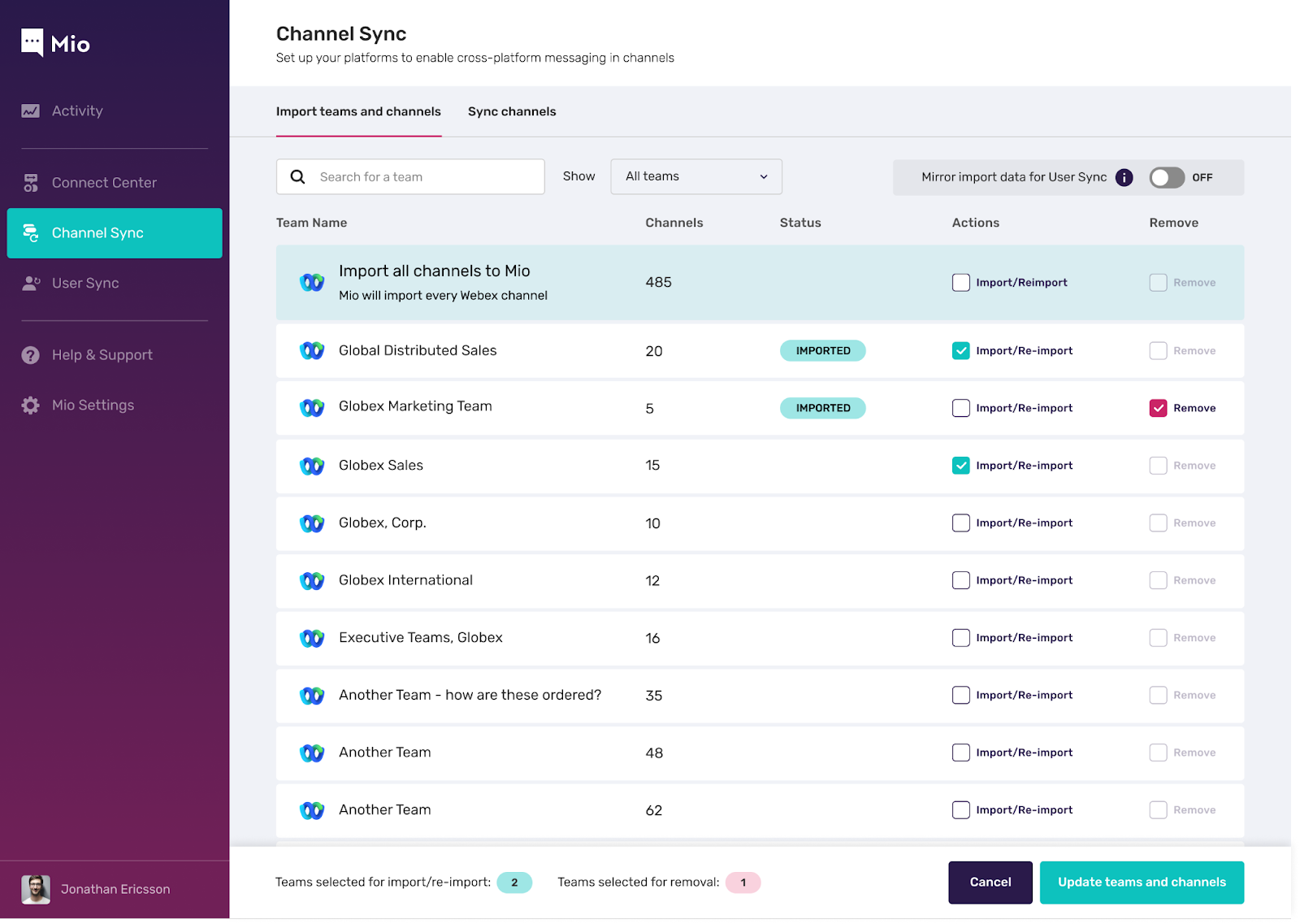 A User Sync resource library, linked at the bottom of Import teams and users, helps with immediate troubleshooting. 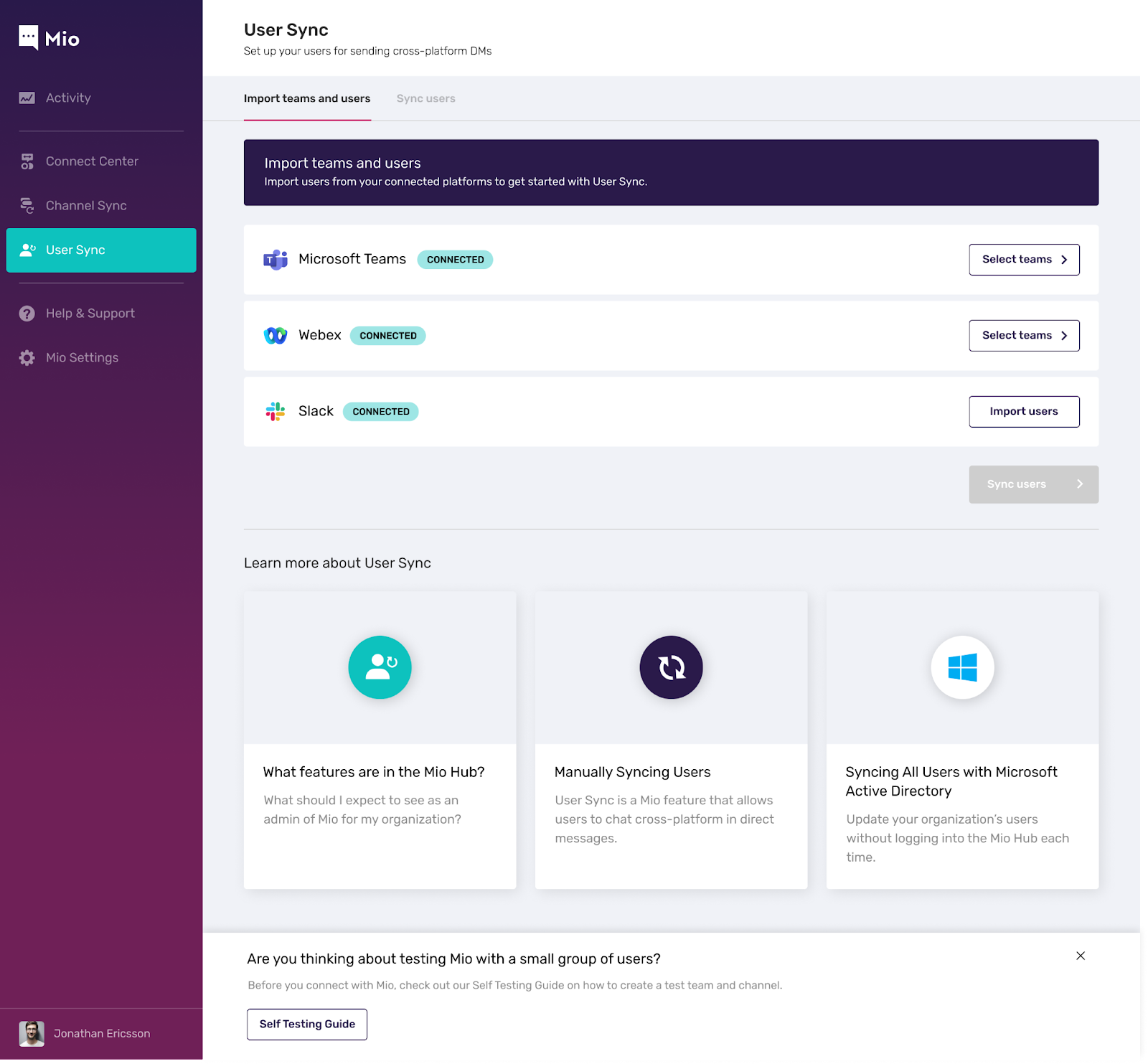 Further redesigns for clarity include switching the column label from "Sync Platforms" to "Secondary Platform Sync" in the Sync Users tab.

And you may notice a new button to click in the upper right corner of Sync Users. This brings us to…

Auto Sync is finally here. No longer will admins have to manually update every user who leaves or joins an organization.

By subscribing to your organization’s Active Directory groups, Mio will automatically keep your user list up to date.

Additionally, Mio now offers the option to prompt all unsynced users. By initiating this option, Mio will send prompts to all users who have set up their primary platforms but who still need to sync their secondary accounts. 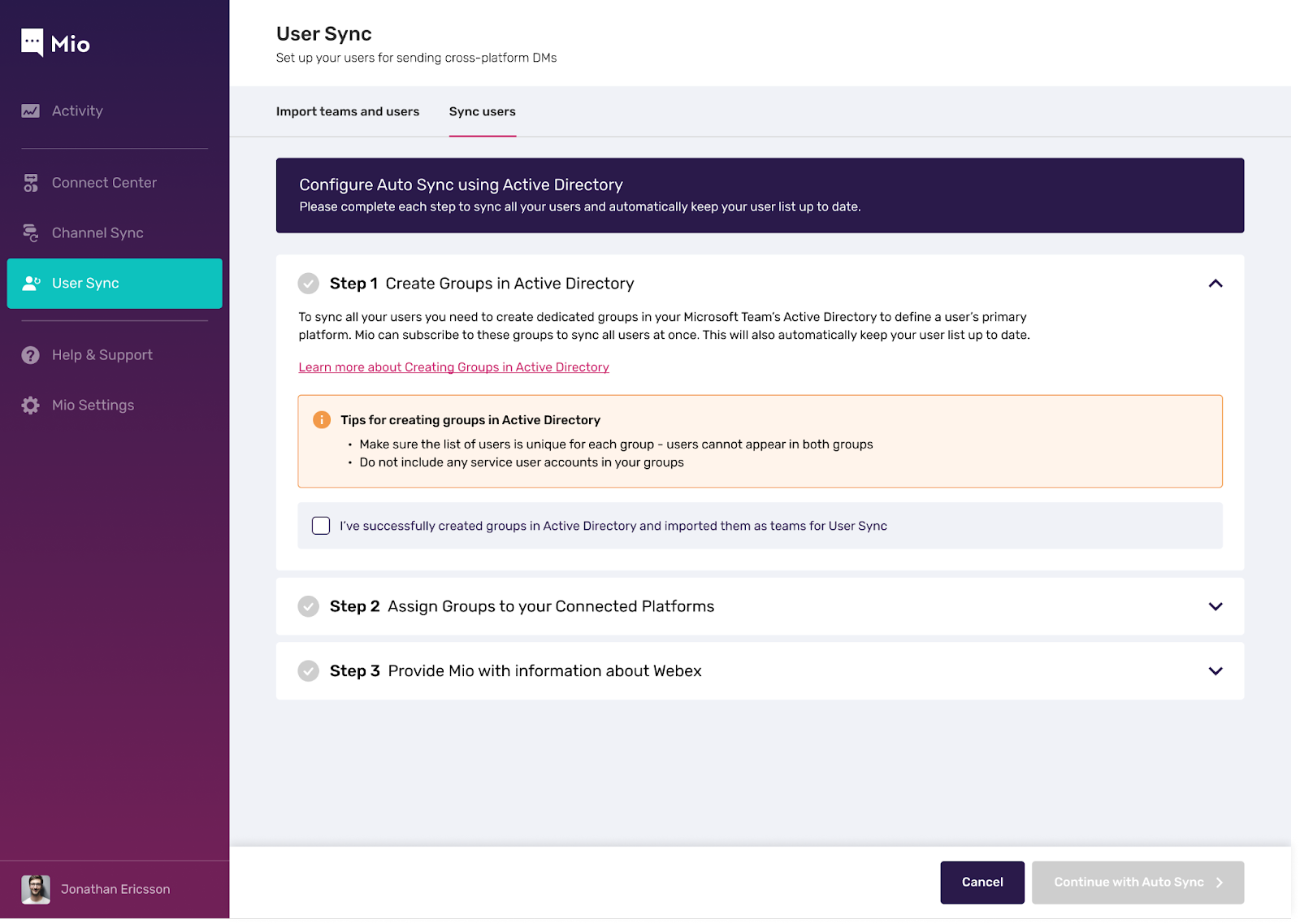 Admins rejoice. It's no longer necessary to have a Teams Service Account to use Mio with Microsoft Teams.

We are always working on updated features to boost and streamline how Mio works for you. Stay tuned for updates on an all-new Activity page of the Mio Hub.

Take me to the Mio Hub now